skip to main | skip to sidebar

A little bit sparse with the posts lately; the school year here is about to end, and I'm a bit crazy with the planning of last-minute classes and Graduation for my 6th graders.

Here are two bentos from among the lunches I've been bringing lately. I really don't know why I keep getting cherry tomatoes; they look pretty but I don't really like raw tomatoes that much. --; I'll look for something else. 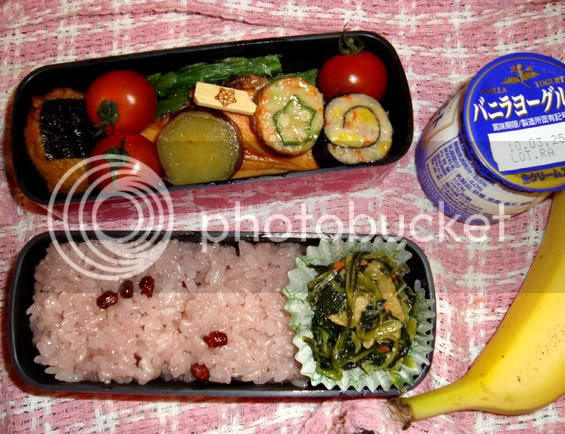 Sekihan is a special rice dish where the rice has been boiled with beans and comes out red. It's often served as a dish to mark someone's coming of age. It's not my favorite thing, but it has a lot of fiber. XD

And I think I've been focusing a lot on シド lately, but I just managed to get a ticket for the current tour, so I will laud them a bit more. ^^ For today's soundtrack we have "Sweet?" It's one of my favorite videos/songs. XD

Rabbit food. Well, not the beef.

Went shopping and got some different stuff. >D Today I'm using the other half of the fish fillet from yesterday. Nice to have some other colors in there, although I'm not completely happy yet.

Lower box: Glass noodle salad with ham and egg, rice with wakame furikake, and some carrots.

This morning's bento prep soundtrack: ナイトメア's "HATE." Hard to prepare bento when you feel the need to do furi (choreography) along with the song. XDDD

Not entirely pleased today, although it'll surely taste good. I think the okazu box (okazu is anything other than rice) needs some yellow or another lighter contrasting color... unfortunately, I was out of yellow peppers. D: Also meant to use different furikake, but I found I was out of the salmon kind I like. TODAY THERE WILL BE SHOPPING. I want to get eggplant and try that as pickles, anyway. ♥

So much for breakfast... Lower box: Heart-shaped tuna sandwiches with lettuce and tomato, another cherry tomato, and Yakisoba. Snow cheese wedge off to the side.

I don't know why I thought I would have time to make those sandwiches; it took forever and almost made me late for school. >_<; I had to skip breakfast and eat something after morning meeting. --; LET'S PREPARING A BIT EARLIER, D.
Posted by D-chan at 12:47 PM No comments:

Fish and round things. 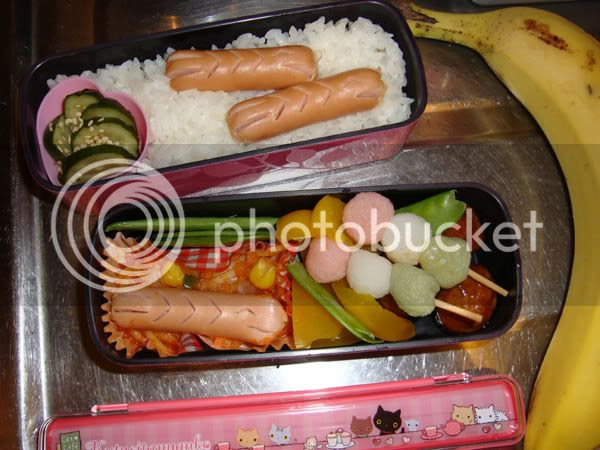 Mini bento has the day off; brought a banana instead.

Very pleased that the hot dog fish came out a lot better than the penguins. ;;;_;;; The package said that after you mold the hot dogs you can prepare them any way you want, but I boiled them this time (instead of pan-heating) and they came out much nicer.
Posted by D-chan at 11:05 AM No comments:

Snow peas were on sale...